Sports has long been a powerful means of facilitating positive social change.  As a shared experience for large and very diverse groups of people, sports events provide an authentic platform for powerful messages and courageous people.  Whether it was Jackie Robinson against racism, Muhammad Ali against war, or Billie Jean King against sexism, the voices were heard, the messages were clear, and America inevitably moved forward. 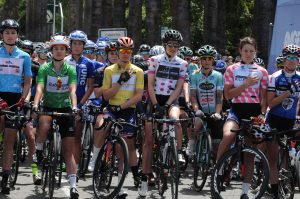 Our vision for the Tour of America is to deliver an entertaining world class sports event that showcases some of the best women cyclists in the world, but we also want to be more than that.  We want to be the global gathering place for meaningful dialogue and actions to address what we believe is the world’s greatest problem: the obstacles to empowerment and equality that are imposed upon half of humanity.

There is a balance to this:  our event must stand on its own as an elite sports event with a viable business model – a high quality competition that attracts the best athletes, sponsors and fans because of their love of the sport.  Top of mind for us is the realization that all high-profile sports and entertainment events are at risk of becoming overly-politicized to the point where the perceived rancor detracts from the beauty and value of the competition itself.

More significantly, some social issues are so important and at such a level of urgency that wrapping them in a sports event raises the risk of trivializing them.  We may be very passionate about our sports, but one of the reasons we love them is because they, at least temporarily, take us to a world that is insulated from the far more serious life and death struggles that are going on as we speak.  That brings us to the cultural struggle of the moment.

Well, really not “the moment” because sexual assault has been going on since the birth of humankind.  The only thing that is really of the moment is our heightened awareness of it and the rising but long-overdue commitment to putting an end to it.  We appear to be in the early stages of this moment, characterized by revelations, shock (some of it real, some not so real) social upheaval and overthrow of the abusively powerful.  With this has also come various forms of retribution, condemnation, punishment, purging and banishment.

There is a shared sense of pain in this reckoning, but also a sense of cathartic progress.  That progress, however, is contingent on a hope that we will never turn back and we will never turn away.  It almost seems like we’ve got to keep moving forward quickly, without losing our momentum, or we might fall down.

And this is where we come in.  The reckoning that is driven by #MeToo and #TimesUp must continue, but we must also ask the question:  Now what?  What can we do to change the culture so that real change doesn’t just affect the high visibility industries and personalities that we’ve been hearing about?

Obviously, real cultural change will be the kind that reaches deep into every industry and institution – to working class laborers, waitresses, nurses, bartenders, receptionists, housekeepers many of whom have long been subjected to the same abuse but never had the means or leverage to end it.  Well, they shouldn’t need “leverage” to end it – it’s up to all of us to end it, but then comes the question, how do we sustain it?

We believe the Tour of America can play a role in keeping this movement energized and focused on positive outcomes.

The Tour of America will be about helping us unite and move forward in two ways:

Empowering – Raising awareness with our commercial, broadcast, educational and municipal partners to provide greater access for girls and women through programs that engage and empower them.  An example:  Recruiting more girls into the STEM fields, educationally and professionally, using our shared marketing and digital assets, and the voices of our athletes, as a point of access.

Celebrating – We will honor and celebrate the achievement of women, past and present and literally put them on a podium for all the world to see.  This is as much about inspiring those girls in impoverished or repressive nations as it is in America to recognize there are no limits to what all girls can achieve.  Celebrating women is also about strengthening the cultural norm of civility, dignity, equality and respect that all people deserve, so that the atrocities of assault and abuse can begin to shrink in our rear view mirror.

I said the Tour of America can play a role, but that’s really much more about all of us. Think of those times when we really believe in something, but we don’t always know what to do to support it.  At least in America, we’ve seen a lot of people get off the couch over the last year and step up to support things they really believe in.  It is the essence of America – this freedom to take action and drive change; it is energizing to see it and even more so to take part in it.

The Tour of America is another one of those things, but in this case, it’s to support one of the most universally important causes of our time – perhaps of any time.  We want to make a statement by correcting the greatest imbalance in the world of sports:  the absence of a women’s counterpart to the Tour de France, but doing it in a way that calls out the absurdity of other gender-based imbalances and injustices that are well beyond sports.

By empowering and celebrating all women, we will help strengthen, and for many, redefine, the very essence of what it means to be a woman in our increasingly connected global society of the 21st century.  We have a lot of other problems in the world – problems that can’t be solved unless we fully unleash the brilliance of all of the women of the world to go after them.

Help us raise our voices and make it happen.  #Join the Journey